One of the reasons that makes emerge Collective Intelligence with special intensity is the existence of victims or injustices within an event. In these cases there is no need for incentives: to help others, or to help justice be done, is reward enough.
These events can be natural disasters such as the 2012 Hurricane Sandy in New York or those in which the Ushahidi platform has been used. These can also be crimes, such as terrorist attacks (the Boston Marathon bombings, for example) or demonstrations with disturbances with shop windows breaks.

The recent events in Charlottesville is one of these events. I am talking about the conflict surrounding white supremacists, with their declarations, demonstrations and actions, including the outrage and murder of a demonstrator protesting against the presence of this group. These events have given rise, once again, to the emergence of Collective Intelligence. A Twitter account, @yesyouareracist, asked the crowd a couple of weeks ago to identify those who participated in the different pro-supremacist demonstrations (there is enough multimedia material in Internet) publishing data about them. Currently this initiative is no longer underway (or so it seems by its TL).

The scheme of such initiatives is not new. London Metropolitan Police used a similar initiative in 2011 to identify those who committed crimes during riots at demonstrations. The crowd was asked to check images of 2800 CCTV to try to identify those who committed crimes (robberies, destruction of street furniture, etc.). 770 people were arrested, from which 167 where criminal charged. The same happened in the initiative carried out by the FBI in the attacks of the Boston marathon, commented previously in this blog.

Two important differences between these cases and the one of Charlottesville, are the objective and who manages the initiative.

The purpose of people identification in the London case was clear. The objective of the initiative carried out by the FBI in the case of the Boston Marathon was the same: Identify a criminal to proceed to his search and arrest by the state security forces.

But which was (and is) the target of the @yesyouareracist account? From what can be read until today in the web, the purpose of the account in general is to publicly expose profiles of people who say that they are not racist but that by their acts they show that they are. In this case in particular, in which those involved do not deny that they are racist but rather publicly manifest it, the account looks for a kind of public denunciation. 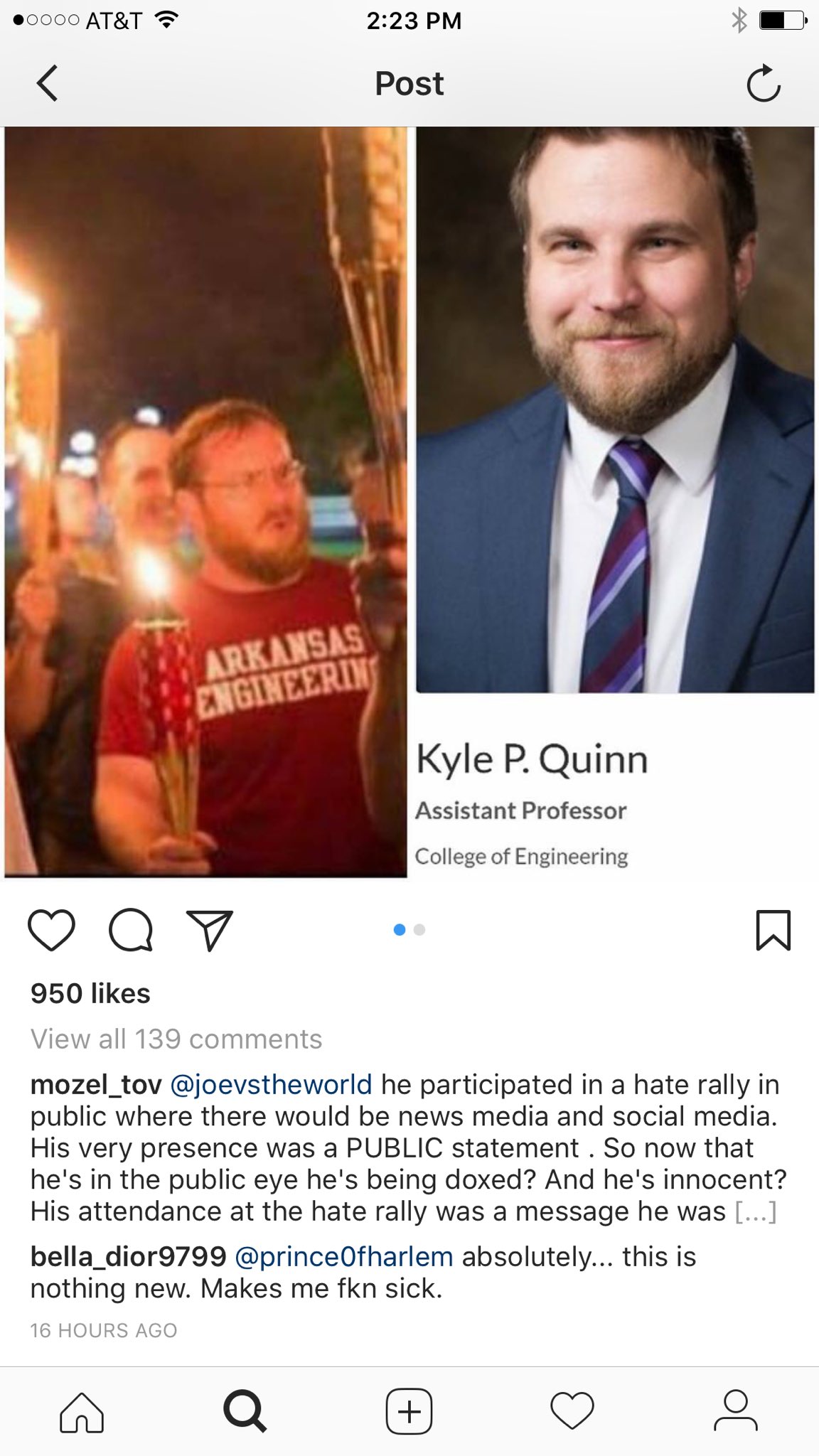 However, despite the surrealist attitude of the supremacists, the identification of people, providing personal data such as phone numbers, addresses of the home, etc. (A phenomenon known as “doxxing”), it is still a powder keg and a witch hunt (although the “witches” are white supremacists).

In fact, a person photographed in the racist demonstrations of two weeks ago was incorrectly identified. Professor Kile P. Quinn was falsely identified with the person who appears in the picture (left). The same thing happened in the initiative led by the crowd in the case of the Boston Marathon. As a result of this false identification, this professor had to spend a weekend in the house of some relative because the fear of returning to his house.

Again, the same mistakes are made because there are two fundamental elements that are not clear (or correct): who manages a “sensitive” collective intelligence initiative and why it does it.

First, Collective Intelligence must be properly managed. In cases in which sensitive information is treated (such as personal data or the identification of a person for the commission of a crime), an “authorized” manager is required, who also does not expose that information publicly to avoid revenges. It is not worth simply that someone wants to do justice (no matter how good intention he has). In addition, in the case at hand, and according to American laws, the supremacists were not committing any crime.

Second, there must be a clear and adequate motive and objective. In the case of Boston or London, the security forces needed to identify certain people (task requested) because they had committed crimes and wanted to arrest them (objective). In the case of @yesyouareracist (who), the objective was for the crowd to unmask the protesters publicly because their way of thinking is at least reprehensible. Some consequence, for example, has been the dismissal of some manifestation of their work (there are more cases).

Despite understanding the impotence of the twitterer who has the aforementioned account, I do not believe that the use of doxxing is the appropriate way. The false identification of Professor Quinn (and it has not been the only one) is the proof of it.